Have you ever met a pogonologist?

Most men who have attempted a beard have probably been one without realizing it as they study the shadow of their stubble in the mirror. It’s not a common word, although I opine it could be useful if you get stuck with a handful of Gs and Os at the end of a Scrabble game. Pogonologists were, on the available evidence, more or less the norm throughout the male gender of the species in the later Victorian age. In Yallambie a look at the faces staring back at you from old photo albums might have you believe that the place was full of pogonologists. John Bakewell was one. So was Thomas Wragge. Edward La Tobe Bateman was another, as were most of the Howitts. At least as far as the men of that illustrious family were concerned.

Pogonology: literally it means the study of beards. A pogonologist is one for whom beard growing has become something of a science. It derives from the Latin “pogonias” meaning bearded, a word that was common throughout the Classical world. The clean shaven Emperor Constantine IV was occasionally known by the moniker “Pogonatus” from some sort of confusion with his father Constans, with whom he had reigned initially and who is mainly remembered now for sporting an imposing chin of facial hair.

It is said that men grow beards not to impress the female of the breed but to impress other men. “Lord, I could not endure a husband with a beard on his face; I had rather lie in the woollen,” said Shakespeare’s Beatrice in “Much Ado About Nothing”, affirming she would rather sleep in scratchy blankets all night than with a bearded man. Yet beards have been around since the cave man, evolving from their primitive natural state to the crimped and trimmed sophisticated designs of later years. The beard would become a symbol of individual style and an expression of personality as men learned to improve on the work of what had been blessed to them by nature.

To some cultures of the ancient word, the beard was a mark of wisdom or alternatively a sign of physical strength. To swear by your beard was considered a sacrosanct act and the kissing of beards could be used as a sign of greeting. To tweak a man’s beard however was considered a grave insult, the equivalent today of an Australian Prime Minister having the temerity to robustly discuss refugees with an American President.

Strange to relate, beards were taxed in Tudor England, first by Henry VIII who liked beards but needed the money, and then by Elizabeth I who simply didn’t like them. The peak of male fashion in beards was reached however in the 17th century when their care was considered the most important part of a man’s daily routine. Hours were spent starching, curling, crimping and trimming beards with the results sometimes dyed and perfumed to suit the owner’s tastes. Such efforts needed to be protected and the owner of a beard might choose to retire to his slumbers at night with it securely protected in a leather case around his neck.

The powdered wigs of the 18th century restricted the popularity of beards for a while but in the Victorian Age they returned with a vengeance. This was an age of Great Men and the bushy beard became a symbol of their world view, the size of the beard seeming to be in direct proportion to the community standing of its owner.

The earliest photographs of Yallambie’s Thomas Wragge shows him with a “chin curtain” style of beard, a type that he seems to have favoured his whole life. That most revered of American Presidents of Wragge’s era, Abraham Lincoln, is remembered for a similar look which he called the “Shenandoah”. It made him look terribly wise, even when all around him was turning to ashes. Before Abraham Lincoln, no US President sported a beard but after Lincoln, every President bar two until Woodrow Wilson had either a beard or a moustache. Perhaps the current American President, with a society as divided now as in the time of old Abe, could be induced to ditch the comb over for a similar hirsute habit. Women would love it because, when you’re a star, you can do anything. At least that’s what this President tells us.

From the available photographic evidence, Wragge’s sons mostly adopted fashionable moustaches during the Edwardian era. Walter Murdoch, who married Thomas’ eldest daughter Sarah Annie in 1903, similarly wore a terrific walrus protuberance on his upper lip. Until the later alterations, there was no internal bathroom plumbing at Yallambie Homestead so water had to be brought upstairs to wash basins in the bedrooms or to a tin hip bath kept in the single available washroom. In an age when shaving was a time consuming business involving a cut throat razor and strop it is easy to imagine the trouble and care required in their daily shaving ritual.

By the time we came to live at Yallambie in the early ’90s, the old house did at least enjoy modern if somewhat incomplete plumbing. Without quite realizing it, in the best traditions of Thomas, this writer has worn a beard on and off throughout his life, usually growing one when it was out of fashion then shaving it off when it came back. The last time was an attempt at a Zapata when the latest Millennial craze for beards was first kicking off. Fashion books and web sites have since been dedicated to this hairy subject with one survey suggesting that 55% of males worldwide wear some sort of facial hair. The current beard vogue became so big in the early 2010s that some reports even proposed facial hair transplants might be had by those men having trouble developing a decent growth on their chins. Not all beards are grown in the face of such adversity however. Guinness Records measured a beard a few years ago at nearly 2½ metres in length. Sarwan Singh, the wearer of this beard, is a Sikh and says that he has done nothing special. He considers his facial locks to be a divine gift from God. All the same, Sarwan should beware for beards can be dangerous. Hans Steininger the owner of a 1½ metre beard in 16th century Austria, died when he stepped on the end of it, tripped and broke his neck.

The lengths and the dangers of the beards of the lumbersexual and hipster subculture from the fashionable end of Melbourne town pale in comparison. Beards can grow on average about 14cm a year but there are those who said that in 2017, beards were about to go the way of the man bun. A recent sighting of a full beard with flowers trained through the fuzz on a fashionable Fitzroy street has me thinking otherwise, maybe.

As for me, personally the three day growth in my mirror is just too darn peppery these days, so when it comes to Yallambie pogonology, my vote has already been cast.

Bring out the Scrabble board. 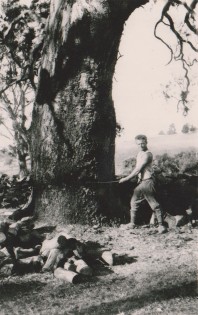 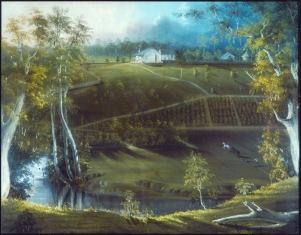 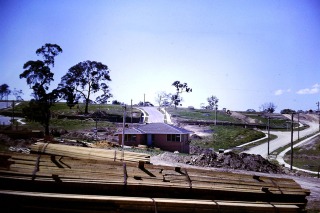 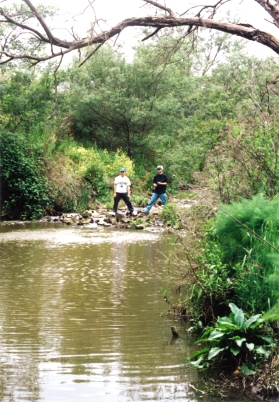 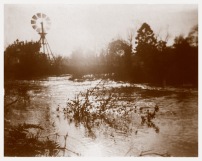 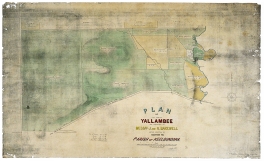 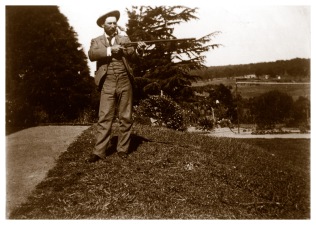 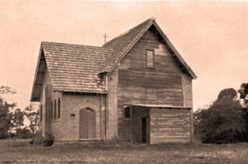 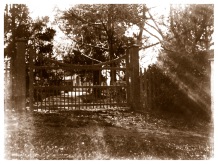 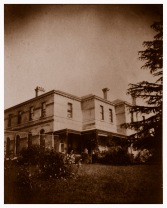 The Plenty Bridge Hotel looking east from the (Old) Lower Plenty Road Bridge. Composite photograph made from screen stills from a film of the opening of the Heidelberg Golf Club, 1928. 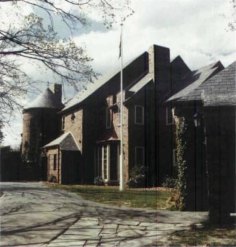 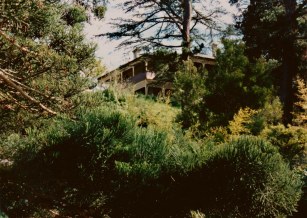 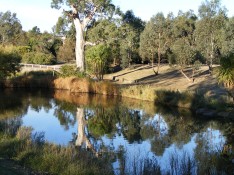 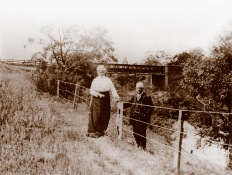 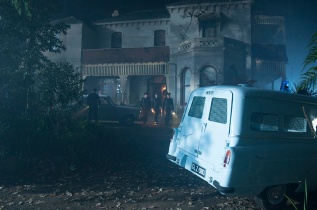 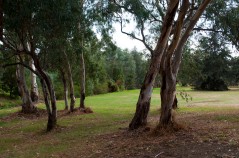 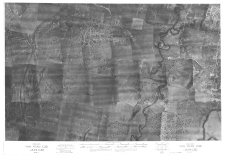 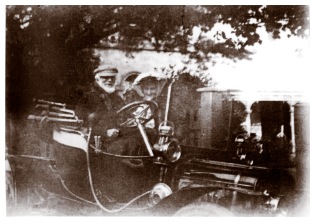 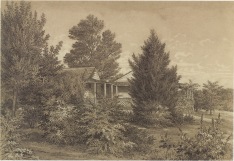 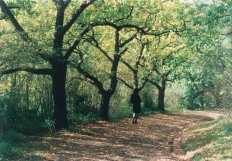 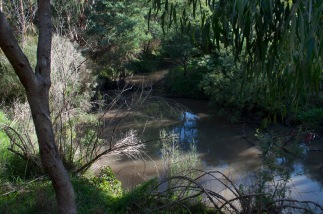 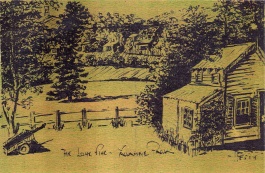 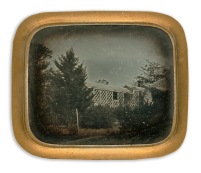 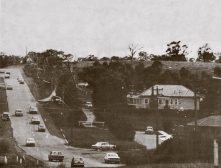 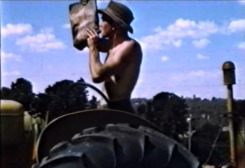 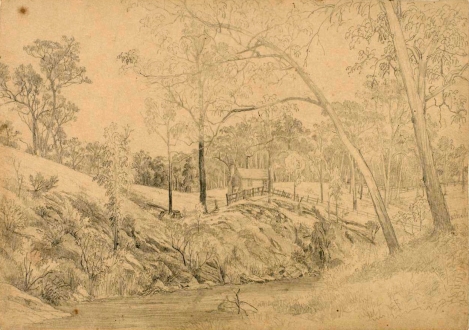